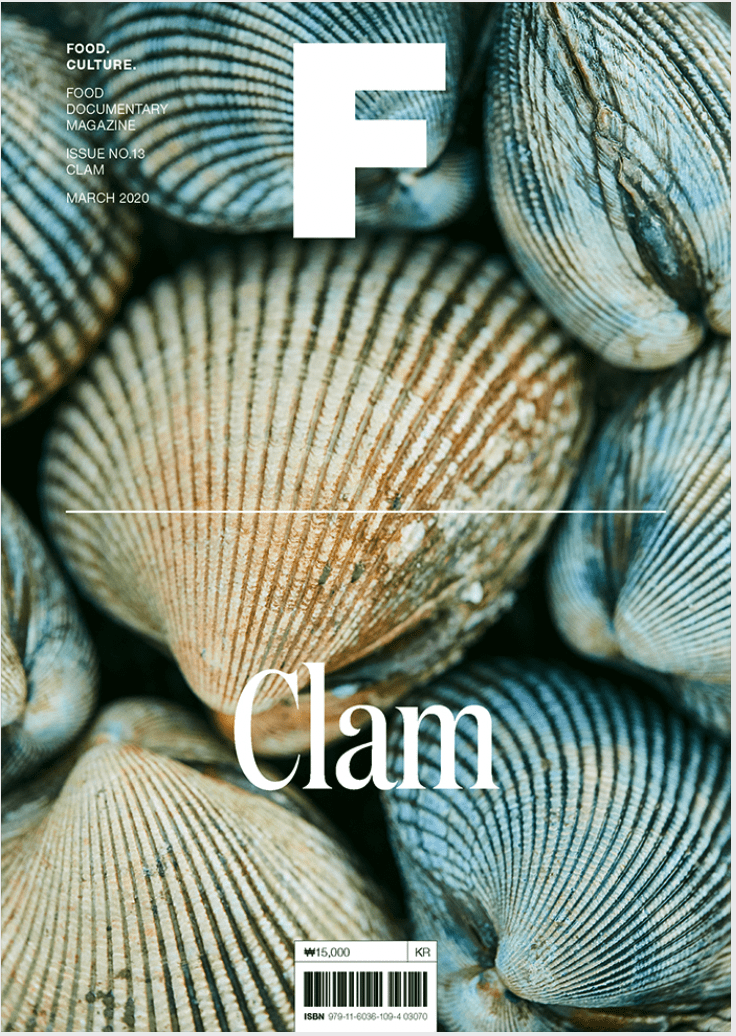 F CUT
Mysterious traces of the evolution of life, engraved on clam shells

INTERVIEW
Jacob Harth : Jacob Harth, a chef who calls attention to the importance of traceable seafood/p>

ON THE TABLE
Clam recipes based on countless innovations and experiments

INTO THE MARKET
Raw clams caught using a sustainable fishing practice and their convenient, processed counterparts

Clams refer to mollusks with complex anatomical structures, spanning a range of species such as scallops, razor clams, butter clams, blood cockles, Asian hardshell clams, and mussels. Clams are like crops—two things that became both sustenance and treasures to humans since before agrarian societies. Known as environmental cleaners that remove nitrogen from ocean waters and lower carbon dioxide levels in the air, clams are emerging as a sustainable food for the future. The unrivaled aroma and texture of these mollusks inspired myriad clam dishes across the globe, with the wide flavor nuances similar to the terroir on wines.

When I make clam dishes, I prioritize texture. It requires careful attention because even if it’s the same variety, optimal cooking time varies according to size. As a chef, clams are a very interesting ingredient because the recipe is relatively simple, but the texture can vary greatly.
Tony Yoo, Chef of Dooreyoo
Seafood was the biggest mystery of all the ingredients in the restaurant kitchen. I believe that it’s integral for chefs to know who caught the seafood that will be used in their recipes, including where and how. That’s why I pay extra attention to establishing a tracking system where seafood is directly supplied from traceable fishermen.
Jacob Harth, Owner-chef of Erizo

Magazine F 13th Issue: CLAM from Magazine B on Vimeo.

CLAM is part of the MAGAZINE F COLLECTION, the one click way to add all 18 titles to your kitchen library.